We made it to Boston!  Ed and I filled up two pods, said goodbye to everyone we know and somehow tricked American Airlines into letting us on the plane with about 50 extra pounds of luggage.  Even a failed engine starter couldn’t stop us!  The best part of sitting on the tarmac for two hours before takeoff was receiving half a glass of Evian and enjoying an emergency Tarmac Entrapment granola bar (the kind with only one Nature Valley bar in it, which American must get made special for occasions like that).

But back to the pods.  Overall, they were a total success.  Three nice men helped us move all of the stuff still in the condo out and into the pods, and we only had to get one minivan towed in the process.  My favorite mover-man was named Angel and he had an enchanting foggy glass eye.  They requested we pay in cash and we happily obliged.

I’d say my biggest mistake thus far in the whole process was labeling the biggest box, about the size of a mini-fridge, “SHOES” and letting Ed see it and understand that there were indeed only shoes in the box.  Probs don’t need those glitter heels here with all the colonial cobblestone, I guess.  OR DO I?  It turns out there is a casino-themed party at HBS this weekend, and now my glitter heels aren’t with me and I probably won’t make any friends.

And here they are packed and ready for shipment: 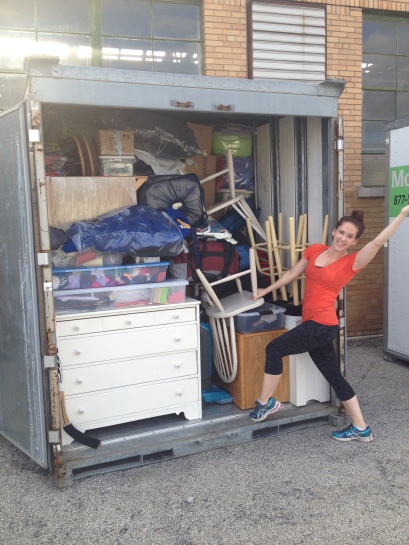 These babies will arrive in Boston on Monday, and will be delivered to our new apartment (owned and operated by Harvard Housing) on Thursday, 9/4.  In the meantime, we are the humble guests of the gracious hosts Julie and Sim Cohen!  We have Baby Cohen’s room and I can’t get enough of his tiny little hangers with tiny little coats.  Photo of the four (five) of us to come once we’re all together and all awake!

1) Where are all the accents?  It was heaven approaching the Haymarket T station while the operator announced, “We ahh now approaching Haymahhket.”  After that, I heard a man leading a duck boat tour say, “Ha!  He must be from New Hampsha.”  Then nothing.  So, a thick Boston accent appears to be a per-requisite for operating a T train or leading a duck boat tour and that’s it.  I will find where the accent people live and I will go there and then I will wait to see if Ben Affleck arrives.  Also, those that do have an accent pronounce “can’t” as if they are English.  Like, “cah-n’t.”  Must be because of the “ah” sound even though there is no “r” in the word.  It really threw me for a loop the first time I heard it, so big thanks to Julie for the warning.

2)  There are all types of people everywhere, all the time.  In Chicago, people stay in their respective neighborhoods for the most part and the melting pot climaxes at Belmont.  Here, it’s Belmont everywhere all day ‘err day.  I was downtown the other day and in the span of two minutes saw business men, street performers, college students, homeless men, crack whores, blue collar workers, and what must have been someone OD’ing on meth.  So you have everyone wandering about with everyone and at first I was worried fights were going to break out but was then assured that people pretty much co-exist in harmony.

3) The T is marked much better than Chicago’s El, in my opinion.  When you get on at a stop, let’s say the green line, there is a full-size map of the green line and the stops the train is coming from are grayed out, so you know exactly if you’re getting on the correct train in the right direction or not.  I have been saved from catastrophe several times due to this system, and Chicago should figure out a way to adopt it.

4) Sequins are “in” here.  Either Boston is embracing 90’s fashions again or they have a really hard time letting go.  Sequins aren’t everywhere but they are enough places that I’ve thought a couple times, “Wow, I guess who wouldn’t want to wear a full sequin sweatshirt on Tuesday at 1PM?”  I also saw a cocktail dress on the 66 bus going from Brookline to Harvard that was crochet on top with full sequin embroidery.  Plus sequin hats, sequin hair accessories, sequin bags and sequin flippy floppies.

5) People are very nice here, but several people in my interviews have admitted that Bostonians are nice initially and are all, “Oh, welcome to the neighborhood!” but when you want to hang out and be friends they’re like, “Welcome to the neighborhood buuuuut I already have a circle of friends.”  Good thing I have friends here already and HBS is crawling with people whose #1 goal is to make friends!

6) Bostonians think New Yorkers are rude and are eager to say that Boston doesn’t WANT to be New York and they’re not TRYING to be, OK?  They also think “the Midwest” (never an actual city) is “so nice!  Just really nice, accommodating people!” and the South knows nothing.

Next post will be about this and how awesome it is:

i want Da Internetz to know that i stalked a mousie in da kitchn n’ i never gave up n’ grammy wuz sew proud of meh!  grampy killed it n’ i got lotz of petz.  i have to go take a nap noaw so bai. 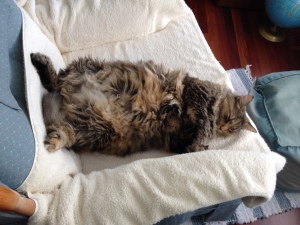 I am currently killing it while temping at a prestigious investment bank in downtown Chicago.  What better time to practice my blogging skills than while answering strangers’ phones?

Ok so let’s see…Ed and I have 12 days until we fly away and there are a few things we haven’t done yet:

Things We Haven’t Done Yet

UPDATE: We are now in Boston and I ended up throwing all of the magazines away even though my soul was screaming, “DON’T!  IDEAS ARE IN THOSE!”

3) Secure a pod service to transport all our belongs safely from Chicago to 18 Banks Street, Cambridge, MA

Things We Have Done Already

1) Sell the giant upright piano to a good, deserving person (it’s going to an 11-year-old boy in our building who is downright sick of practicing on a keyboard)

So things are really coming along!  August 24th will be here in no time, and thank god, because I have packing anxiety dreams almost every night where I fill a suitcase or box, only to realize there is more stuff to put in the box, or the box is all of a sudden empty and I have to start over, or the box disappears and I have to carry it all instead, or I realize I’ve missed the flight because I took too long packing.  Ugh.  First world problem turned literal first world nightmare.

Other things that are happening in my life: I purchased a Nume curling wand last night because my beloved 1.25” Hot Tools curling iron broke (the clamp only stays in the “up” position now.  NO.) and I hear Nume is supposed to be of “professional” quality and I would like to   be a professional.  Also last night, Ed and I ate Miso Asian Kitchen take-out for the last time <sob> and I felt so bad because my friend there who always says, “Hi Emilyyyyy!” when I call to place the order and “Oh, for ED!!!” when I ask for a ginger ale, has no clue that our weekly order of crunchy spicy tuna roll and chicken rice bowl has come to an end.  She’s just the nicest, but she seemed stressed last night so I didn’t tell her it was our last order, I just said, “See you next week!”

I have 1.5 hours of temping left but I’ve run out of things to tell The Internet and I don’t have any photos I can upload and then discuss.  Oh wait – I just looked in what appears to be the daily planner of the girl whose desk I’m sitting in, and under her 2013 resolutions she has checked off “Get a new job!”  Good for her! 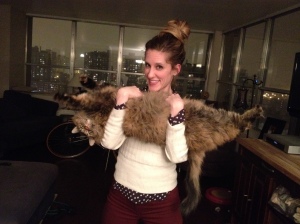 hey whut about meh?  here iz mawmee #2 holding meh how i like it.  see how pritty i iz all strecht out?